I think I need to sort out a few things if I’m going to keep blogging on a regular basis…at least for the posts that take me a while to craft (which is most of them at the moment!)

2.  Be kind to my hands – I absolutely adore my MacBook Air (it’s the dinky-sized one), but I’ve just spent 3 hours on it trying really hard to be a responsible blogger and doing some research relating to some photographs I want to use in a post at my other blog – New York State of Mind.

We took the photos in December at the Metropolitan Museum of Art in New York, where we had a fantastic time looking around their Nineteenth-Century, Modern, and Contemporary Art Collection.

END_OF_DOCUMENT_TOKEN_TO_BE_REPLACED

Cereal, How I (Used To) Love Thee…

I find myself ‘reminiscing’ about things I no longer eat.  Like cereal.

I haven’t eaten cereal since climbing aboard the Primal wagon almost 2 years ago.  We’d tried a ‘low-carb’ diet several years before, when Atkins / South Beach / (insert name of other low-carb diets here) were all the rage – in fact we went with Barry Groves‘ approach from his ‘Eat Fat Get Thin’ book and stuck with it for over a year.  Being ‘true carnivores we found it worked well for us, but went back to the Red/Green approach from a Slimming World diet we’d done on and off over they years, when we wanted to re-introduce baked potatoes, pasta and rice back into our daily food choices – we missed them…

However, Mike was finding his tolerance for rice worsened as he got older, giving him VERY unpleasant side effects that escalated to the point where he’d not be able to breathe due to the amount of swelling in his stomach after eating it.  The swelling was literally giving organs such as his LUNGS no room to expand… :(.  Mint tea was an absolute god-send.  (I must add, rice also makes me feel uncomfortably bloated but nowhere near as bad as Mike).  As is usually the case with intolerances, it’s a food he adores, having been brought up on it as a toddler in Singapore.  His ‘last meal’ would happily be  plain boiled white rice with a soft fried egg on top and soy sauce .  I use the present tense rather than past tense on purpose – the craving hasn’t gone away – just the memory of the pain – and terror the side effects caused –  hasn’t completely disappeared.

END_OF_DOCUMENT_TOKEN_TO_BE_REPLACED

Last night we went to the newly renovated City Varieties in Leeds to see Phill Jupitus in a new show called ‘Big Society! A Music Hall Comedy’.  It’s a production by the Red Ladder Theatre Company, in collaboration with Chumbawamba.

I wasn’t too sure about it initially – it sounded a bit ‘political’…but we like Mr Jupitus so thought ‘what the heck!’ and booked.

Here’s an exerpt from the Big Society! programme:

Origins of the Show 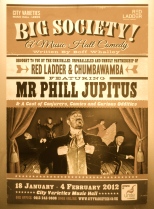 Big Society! was written in response to a huge wave of government cuts to public services, healthcare,arts and pensions.  Leeds City Varieties, newly-refurbished, was celebrating over 150 years as a venue for usic hall entertainment, and it seemed apt to set the show in the Britain of 1910 – when the country was run by ex-public schoolboys and boasted an anachronistic ruling class of monarchy, aristocracy and nobility.  Over 100 years later and very little seemed to have changed’

The show starts with the ‘Big Society Band’ – all the characters from the show – walking through the dress circle and down through the stalls singing the theme of the show – and from the second they emerged I was absolutely hooked!  I got that mixture of butterflies and giddiness in my tummy usually reserved for exciting holidays, or special occasions.

All the music is specially written for the show and it’s catchy.  If you’ve ever been to the City Varieties you’ll know that the working area of the stage is…what’s the phrase…’compact and bijou’ – yeah, that’s it…!  They made extremely clever use of it though and we loved the main set of their shared dressing room.

END_OF_DOCUMENT_TOKEN_TO_BE_REPLACED

Climbing back on the Primal wagon

To be totally honest, we sort of gently slid off the wagon starting late November last year, ably assisted by my birthday, a trip to New York early December, followed by Christmas, New Year and finally my sister’s birthday weekend last week.

Thinking about it, we didn’t so much as slip as sit on the edge of the tailgate bit at the back, holding on by our fingertips, getting jostled around and watching out for any particularly big potholes that could throw us off it completely.

Don’t get me wrong, we didn’t turn into bread, pasta and french fry guzzling monsters – more like discerning nibblers…

END_OF_DOCUMENT_TOKEN_TO_BE_REPLACED

I just can’t resist tinkering with this blog site… Widgets, Categories, Pages, Tags, Menus, Custom Menus… It calls to me…

Fiddling, ‘faffing’, tweaking, moving stuff around, trying to make it nice to navigate around – getting the look and feel right…I have all this ‘stuff’ in my head desperately trying to get out onto this ‘virtual paper’…

END_OF_DOCUMENT_TOKEN_TO_BE_REPLACED

I tasked myself with making a carrot cake for my sister’s birthday.  I’d never made one before so off I went to do my research on the good old internet!

I eventually settled on this one by Rachel Allen from the UK TV Good Food site.  I occasionally watched her show on their satellite channel and liked the way she cooked – she also runs a baking school which they show parts of in one of her programmes.

If you’ve browsed around my ‘About’ page you’ll see we’re ‘Primal’ with our eating habits.  This means the ingredient list raised my virtual eyebrow so I immediately started ‘tweaking’ it in my head – a big ‘no-no’ in the cookery world really, but I wanted to try get a balance between it being a great birthday cake and not having all that wheat flour and sugar in there.  (I don’t use refined sugar by the way – I always use unrefined / raw cane sugars – END_OF_DOCUMENT_TOKEN_TO_BE_REPLACED

Welcome to my blog!

Unless specifically attributed to another user, all content © Jacquie Finister. Unauthorized use and/or duplication of this material without express and written permission from this blog’s author and/or owner is strictly prohibited. Excerpts and links (excluding photographs) may be used, provided that full and clear credit is given to the author and 101usesforafork.wordpress.com with appropriate and specific direction to the original content. The use of any images on this site without permission in any form is prohibited.
101 Uses For A Fork
Blog at WordPress.com.
%d bloggers like this: